Guys I am so excited because I made cinnamon rolls today – YES!  Are they the best you’ve ever seen?  Probably not LOL but that’s ok.  I’m still proud of my efforts 🙂

I wasn’t sure whose recipes to explore.  I’m also those people who for whatever stubborn reason lacks the interest of following instructions and enjoys breaking away to do my own thing – don’t ask why (…probably why you didn’t love it). Also, The Eagle doesn’t really care for cream cheese so I changed the glaze as well.

I was nervous the entire time.  Whenever I’m near bread/yeast, things go wrong LOL  If you read the previous blog about biscuits then you should remember me mentioning I tend to over kneed or simply destroy the dough.  OH – FYI, I’m going to practice biscuits sometime this week. Not only should you wish me luck, BUT also send out a bread prayer – just saying and thanks in advance!

I’m not posting the recipe either.  Not because I don’t want to share, but because I’m still working on it for it’s a mixture of a few.  Besides, it’s not 3 or 4 stars yet. The bread came out well, but I could have pulled it out of the oven few minuets sooner. It baked for 25-30 minuets at 350 degrees.  I should have taken it out the first time I checked on them 20-25 minuets in.  Luckily they were still soft.

For the icing I combined powered sugar, butter and VERY little cream cheese.  He actually enjoyed it – Shocking! 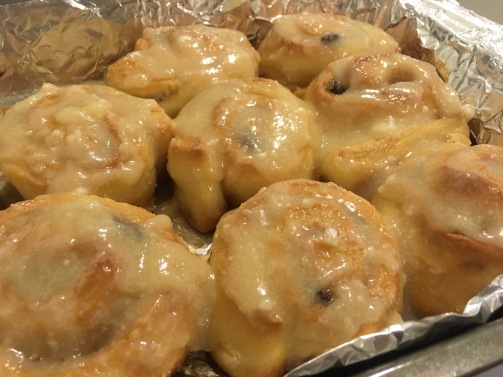 Over all, we were pleased.  They were yummy enough.  I ate two back to back and a third an hour later.  I was VERY proud of myself, but I know what’s great and I have ways to go, but that’s ok because I’m down for the ride. <eye wink>

Well, I just wanted to share.  And if there’s something you too are working on, you have my support 🙂

YOU CAN DO IT!